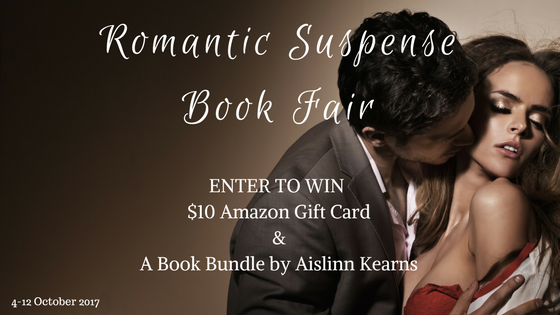 Welcome to the Romantic Suspense

The weather is cooling down and it’s time to escape to another world! We’ve put together a book fair, featuring a bunch of great book bargains for those rainy fall days. Everything on this page is either free, 99c or free in Kindle Unlimited, so get one-click ready!

Once you’ve finished shopping, make sure you enter the giveaway at the bottom of the page to win a $10 Amazon gift card or a 7 book bundle from Aislinn Kearns. 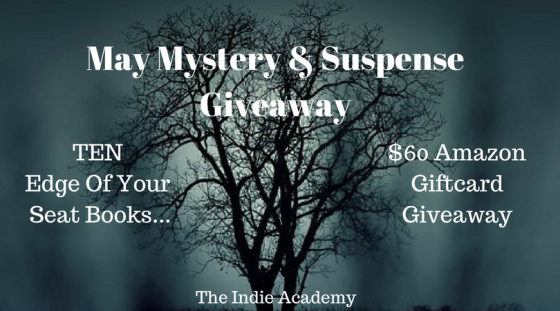 Welcome to The Indie Academy’s May Mystery & Suspense Giveaway!

Mystery, suspense, crime, romance and paranormal – we have it all!

Ten books to keep you on the edge of your seat and a $60 Amazon gift card to be won!

Previous books in the Trilogy:

Five years ago, Nathan’s world came crashing down. The witness protection program stole the woman he loved and now he’s lost everything – including hope that she’s still alive. His security job is a daily reminder of the girl he failed to protect, dragging him deeper into despair.

Forced to assume the identity of a dead girl, Caitlin struggles to rise from the ruins of the life she lost. A career change summons her home, but Perth isn’t the safe haven it seems. Someone is hunting her – one of her kidnappers, a long-lost relative or another terrorist with an axe to grind?

When nightmares from their past threaten to engulf Nathan and Caitlin, can a broken hero and a girl living another woman’s afterlife finally fight their way free?

This is the final book in the Nightmares Trilogy, which includes:

Demelza Carlton has always loved the ocean, but on her first snorkelling trip she found she was afraid of fish.

She has since swum with sea lions, sharks and sea cucumbers and stood on spray-drenched cliffs over a seething sea as a seven-metre cyclonic swell surged in, shattering a shipwreck below.

Sensationalist spin? No – Demelza tends to take a camera with her so she can capture and share the moment later; shipwrecks, sharks and all.

The Ocean’s Gift series was her first foray into fiction, followed by the Nightmares trilogy. She swears the Mel Goes to Hell series ambushed her on a crowded train and wouldn’t leave her alone.

A tiny taste of what’s in store:

“I know something you won’t miss about Melbourne,” Jo said as she peered through the window.

The packing tape made a tortured sound as I used it to seal another box. “What? The ever-changing weather?” I scrawled BOOKS across the top of the box with my marker, then decided to label the sides, too.

“No. The commute to uni. Squeezed into a packed train carriage with all those crazed commuters, forcing yourself not to freak out at the sheer number of strangers touching you…I’ve seen your face on the train. It’s like you’re trying not to scream.”

I smiled wanly. Trying not to stab someone, actually. Five years and my skin still crawled if anyone touched me. Maybe I should have become a nun, not a doctor. No, I wouldn’t be allowed to carry a knife everywhere if I were a nun. Plus, there was the matter of having killed people…”I’ll be able to walk to work now. I told you that apartment next to the hospital was a good investment.”

She stuck her tongue out. “I’m an accountant, not an investment adviser. But I still think you should’ve rented it out this year, before you moved in. Six months’ rent is a lot of money to throw away…”

It wasn’t about the money. It was about having my own space, brand new, that no one else had lived in or done things in. A place without a past so I could create my own future there. Of course I picked Perth. After so much time away, I wanted to go home. With a new name, a new career and a whole new life…but it was home. Someone else’s afterlife…haunting the place where I’d nearly died. It was fitting. Every time I looked at St Elsie’s Hospital next door, I’d remember my time there as a patient and hopefully have more sympathy for my patients. Or go to pieces and be admitted to the psychiatric ward.

No, I told myself. I was prepared to go back and face any demons that I hadn’t slaughtered in the past. Given they were probably on their last legs after their last encounter with me, it’d be an act of mercy to put them out of their misery. Euthanasia, even, though that wasn’t legal in Western Australia.

A blurry hand waved before my eyes. “Hello? Are you even listening to me?”

“I hope you introduce me to him soon, because any man who can make you daydream that deeply has to be drool-worthy. I want to know his name, his bank balance and how many times in a night.”

“How many…?” My eyes widened as her hands eloquently described fast-paced sex. “None, Jo. If I’d slept with a man, I’d have told you.”

She sighed, the deep sort that said her heart ached for me. “It’s been five years. No one can go that long without wanting sex. I know you got hurt, but I know you slept with that sleazy guy in Perth, which means you’re hardly afraid of intimacy if you let him touch you. Now, I know you’re not pining away for him, so why haven’t you even flirted with anyone else?”

Because I don’t want anyone to touch me. And when the man who’s saved your life several times over, risked his own life and his sanity, plus killed for you and stayed at your side until you recovered, believes he’s not good enough for you, you start to believe that no one will be. Why would I settle for a one-night stand with someone who wouldn’t kill for me?

Six years ago, I’d have told Jo all of this, but now I couldn’t. After what happened, some stories were best left untold. And I’m not sure she’d look at me the same way if she knew about the people I’d killed, Even if they did deserve it.

“I haven’t met the right one,” I replied curtly. “I’m looking for a hero who’s not just Prince Charming.”

Jo grinned. “A knight in shining armour and awe-inspiring sword skills?” Her hands described the size and nature of his sword.

“A knight, maybe, but with dented armour and maybe scorch marks up the side, to show he’s taken on an army and he’d walk through fire for me. A sword with a few nicks in it, so I know it’s not just for show. And later, when we’re alone, he’d take it all off and he’d make me feel like I was his whole world.”

She burst out laughing. “So, you’re after Sir Perfect with experience? Men like that don’t exist. You might get some of it, but not everything. Just as long as you don’t settle for some sleazy bastard who fools you into thinking he’s perfect, I guess.”