13 has always been unlucky. But now it’s turned deadly…
Darkness has fallen. Real and unseen, evil is out there. Waiting. Watching. Biding its time. It might be your neighbor, your best friend—or something much, much worse. It might be the shadow itself. It will hunt you down when you least expect it. It will talk to you in the quiet hours of the morning and follow your footsteps when you’re alone. It’s chosen you…and it always gets what it wants.
13 dark tales await you. Ready to bring your worst childhood nightmares to life, to push you to the brink, and make you question your every decision…
The circus. Your beloved carnival rides. That mom and pop motel you pass every day on your way to work. They’ll never look innocent again. Because they’re not. No one and nothing can be trusted. Not even yourself.
Are you ready to take the ultimate dare? To spin the devil’s wheel?
Be careful…
13 will get you every time. 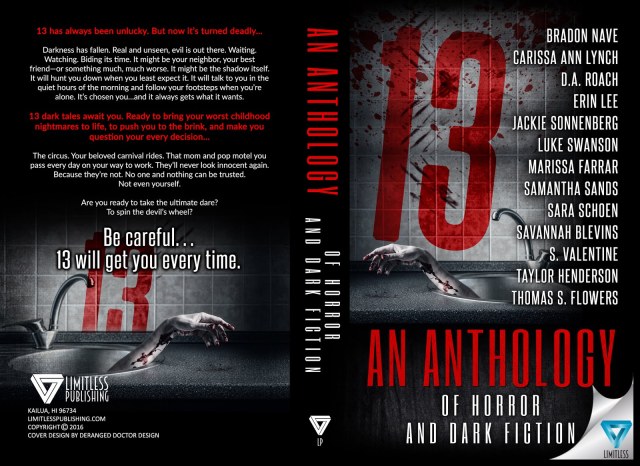 With no clues of any kind as to what happened to her parents, and no other close family, Roshanna must move to Texas, Austin, to live with her last living relative, Uncle Joe after the funeral. But this means leaving her best friend, Marissa Mason behind.

That’s when she meets Bodhi Vincent, her uncle’s chauffeur, who seems to understand Roshanna in a way no one else has…

Bodhi is her rock after the death of her parents and the longer she stays with her uncle, the closer they become.

But before moving away, Roshanna was confronted with a shocking secret that Marissa had kept from her, a secret that changes how she sees life and the people in it—Marissa is a pure soul and her foster parents are soul drainers who need her pure energy to survive.

More shockingly, her parents’ souls were stolen by their murderer.

When Roshanna and Bodhi try and track down Marissa’s father, Leith Mason, in order to retrieve her parents’ souls back, they find themselves held hostage at gunpoint.

Will Roshanna and Bodhi survive? Will she ever find her parents souls? Or will their souls be the next ones to be taken?

Keren lives in the UK and is an avid bookworm; she has been since she read things like Black Beauty, What Katy Did and The Hobbit as a child. Her first real memories of reading are the summers she used to lie on her bed and re-read What Katy Did and What Katy Did Next.
Over the years she has come to realise that she is a bit OCD about books. They have to be in perfect condition without the slightest bit of damage.

She is a book reviewer and has been for the past 18 months or so.

The idea for Stolen came to her one day but she never thought she’d actually write it let alone publish it. If it wasn’t for her author friend Kira Saito, the idea would still be stuck in her head not on paper. But constant love and support from Kira is why you are now able to read Stolen.

Stolen is her first novel but now that she’s written one, she knows she needs to write more. There will be one sequel, called Freed which will be from Bodhi’s POV. This will be set a couple of years on.

Then, the plan is for her to write either NA or Adult Contemporary Romances. She has a big crush on Lady Antebellum’s music at the moment and their songs have inspired a few book ideas.

Torn Souls (Soul Ties #2) by Lisa Swallow, is now available on Amazon! This follows the story of Jack and Dahlia, which actually begins before Soul Ties, so if you haven’t read book one, there is no reason you can’t … END_OF_DOCUMENT_TOKEN_TO_BE_REPLACED 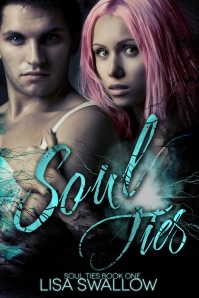 On an English university campus Ava is hunting Keir. She needs his Nephilim soul to trade for her freedom.

But Ava didn’t expect to find terrible secrets about the fate of the souls she takes. Or fall in love.

Soul-hunter Ava has retrieved hundreds of souls from demons but has never been assigned the dangerous mission for a Nephilim soul. When she arrives on campus and meets Keir, she discovers he has secrets more valuable than his Nephilim soul—secrets she could trade for the life she wants. She also meets Dahlia, the human girl with an inexplicable hold over Keir, and secrets of her own.

When she uncovers the true fate of the souls she takes back to her superiors, and what Keir is doing to try and prevent it, Ava’s world is turned upside down.

Forced into battle where the lines between good and evil are blurred, Ava is faced with the choice between saving herself by betraying those around her, or helping Keir and risking her life.

This book was given to me as a gift, in the interest of paying it forward I decided to write a review about how much I loved it!

I was really excited about reading this book after hearing great things. It’s right up my alley with a paranormal plot and kick-ass heroine right in the centre. I have to say it didn’t disappoint! For me the most important part of any story is the characters, and Ava drew me in right from the first page. While she possesses some mean fighting skills and an attitude I wish I had, she also has a hidden vulnerability that makes us like her—despite some of her mean dialogue.

I found her intriguing as a character on her own but the way she interacted with Keir and Dahlia often made me laugh out loud. All the characters in this book are well developed, they are very different from each other and the author did a great job of keeping their voices distinct.

While I think love is important in a story I hate when it overwhelms the storyline, and although there is a strong romance in this book it never reached the point of overbearing for me. There is great chemistry between Ava and Keir, it never felt forced and it became a crucial part of the story rather than just being put in there for the sake of it.

Finally, the plot was well planned out, from the beginning it brought up enough questions to keep you wanting more and gradually revealed secrets as the book went on. At no point did I find it predictable and it leads nicely into the sequel Torn Souls, which will be published later this year.