Creating The Shadow Series took four years of my life, close to 18 months of that was spent just on editing. A lot of people underestimate exactly how much editing goes into a book, the truth is it’s more important than the writing. When you’re in the process of penning your story it’s surprising how many stupid mistakes come out, it doesn’t mean you’re a stupid person it’s just that you use different sides of your brain to think logically and creatively. When you’re concentrating on plot there is no way to make sure you’re adding all the necessary commas and apostrophes. The best way is to make as many mistakes as it takes to get that story out and deal with the cleanup after. Which means you can’t neglect the editing process, it should take the same length of time it took to write the book, if not longer.

When I’m working on a new novel I usually spend about six hours writing, stop for a break then spend about two hours going over what I’ve written and making sure the dialogue and characters are coming across the way I intended. During this check I correct obvious mistakes but I focus more on plot than spelling and grammar. Aside from this nightly check I don’t go back to the beginning of the book until I’ve finished the first draft. It’s too easy to get caught up in the first 30 pages, if you start trying to correct it you lose the rhythm and end up trapped in a never ending cycle.

Once the draft is finished I get out a fresh notepad and start at the very beginning. This first pass isn’t to make corrections either, it’s simply to read and take notes. I try to read the story as though I didn’t write it, focusing on how a reader might interpret the plot. My notes usually end up sounding like a bit of a joke, things like; pg 2 – cheesy paragraph, chapter 6 – needs restructure, page 57 characters sound whiny and annoying etc. It doesn’t matter exactly what the notes say, as long as I know there’s something wrong with it and I need to rewrite that section.

The faster I complete this first read the easier it is to notice mistakes in consistency, sometimes you will say it’s winter in chapter 2 and a couple of pages later it has changed to summer. You’d be amazed to know how many times simple mistakes like that slip in. The good news is you get better at picking up on these mistakes and countering them. I learnt a little tip from another author along the way and it has been an incredibly useful tool. When I write a new character or location into my books I create a profile card for that person or place. 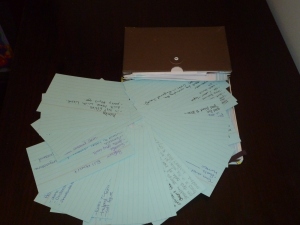 It contains just simple notes like appearance, eye/hair colour, name, age, personality traits. The card is then filed away in my profiling folder and each time I refer to them I have a reference. Before I discovered this handy strategy I was shocked how many times a person’s eye colour changed without me realising I was doing it!

Tricks like this make you more efficient but they are things you can only learn with experience, it’s all about trial and error, learning what works for you.

Once the first read is finished, I have a notepad filled with suggested changes, I then start at the beginning and rewrite all the sections that have problems. Here’s where it gets tricky, the more you rewrite the more inconsistencies that pop up, so when you’ve finished the entire draft you have to go back to step one—read the manuscript from start to finish, take notes and rewrite until everything is flowing smoothly. I find this usually takes three passes, but that’s not the end of it. There will always be problems, things you don’t notice no matter how many times you read it. The best thing is to get a fresh pair of eyes on it. For me this person is my sister. Sarah has been mentioned in various blogs now and the reason is that these books would be very different without her input, she deserves credit for that!

Sarah reads faster than anyone I’ve ever known, she can get through a manuscript within 24 hours and her speed actually makes her better at picking up flaws. Most people would read a few chapters and take a break which means they might not notice an incorrect weather change or a misplaced event. Sarah picks up tiny details I hadn’t even considered looking at, she gives me an overall opinion of the storyline, she notes chapters where the wording seems off and she tells me when a character is behaving in a way that doesn’t suit their profile. Her input is invaluable so I can’t thank her enough for that.

After Sarah’s feedback I make the suggested corrections, depending on the amount of work required this is usually done in two passes. Once that’s complete I send it out to close friends and wait for their feedback. It’s also really interesting how people interpret things, everyone reacts in different ways and hearing various angles helps me gain perspective. It sounds ridiculous but one of the most useful feedback points is when a person tells me a character annoyed them, it makes me realise I’ve overdone something, I can then go back and take out repetitive thought cycles that makes characters seem like they’re over thinking things. For The Shadow Series I received a lot of feedback via email, I printed them all off and kept them in a folder to revisit when I’d finished the entire series.

All the notebooks and drafts used in the editing process.

Completing the final book was an amazing feeling but I knew there was still a lot of work to be done. They often compare a person’s first book to having a child, you love it so much that you can’t see if it’s imperfections, many authors advise that you should cradle your first book until that first love fades away and then if you still think it’s good enough—try to publish it. By the time I reached book four I could see that book one was pretty ugly. I felt the series had the potential to be published but it had been so long since I wrote the beginning, it was no longer an accurate representation of my writing skills and I knew I could do better.

I rewrote book one, essentially the storyline remained the same but I changed sentence structure and took out unnecessary pieces of information. Most authors publish books as they write them, I was lucky enough to be able to go back to the beginning and take out plotlines that were started and then abandoned. I added emphasis to the things that were relevant to the future of the characters and changed all the little details according to the feedback I’d received. I knew the editing process was going to take a long time, I allowed myself a year but it took an extra 6 months.

The first edition of Beyond the Shadows.

Before releasing it to the public there was still one final process to get through, so much had changed in the series from when I first wrote it, I needed a final interpretation. I asked my mum to be responsible for the last language edit, the spelling and grammar check. I’d read the books so many times I found it near impossible to see it objectively. Thanks so much to Mum for working through them!

I also wanted one last lot of feedback from Sarah. I did cut the timing pretty fine, she was due to have a baby in March 2013 and I sent her the four books a few weeks before. She can read fast but there were a lot of distractions as she prepared for her first child. The week she was due I resigned myself to the fact that she wasn’t going to get time, words can’t describe my delight when she told me she’d read them during the week that was overdue. She lives on the other side of the world so we spent hours on the phone conducting a full run through. It was the most thorough feedback I’ve ever had, literally down to individual sentences. She went into labour 48 hours later. That woman is amazing, and thanks to her beautiful daughter for hanging in those extra few days!

Editing four books back to back has been a great challenge to my stamina and motivation. It’s certainly been difficult to maintain concentration, there were days when I truly felt like I had nothing left to give to this series but I pushed through it knowing I would never forgive myself if I didn’t give it everything I had. The sense of achievement is pretty amazing, I feel this quote from Claire Corbett sums it up perfectly.

“The novel is the ultra-marathon of the arts. You do it because it’s hard, because you’re easily bored and because you want to find out what happens when you push yourself. Like climbing Everest or raising a child, it’s painful and it can’t be done perfectly and most of the time you’ll feel like it can’t be done at all but when you do it’s exhilarating…”

If you think all that sounds like a lot of effort there was one final hurdle—publishing. Part III Publishing The Shadow Series will be published Sunday 12th May.